It is commonplace that, induced by the recent financial crisis and its ramifications on the global economy, the market environment in the financial sector has become much more severe for the next years. A plethora of factors directly or indirectly related to the crisis increases cost pressure on banks and drives down their overall profitability. Although offshoring of functions has lately faced scrutiny due to some prominent failures in the European banking industry, shoring of functions, either to a third party provider or to a captive service provider, is still a viable option to effectively reduce costs—if done right.

Historically, the banking sector was characterized by a low share of external sourcing in the total value chain in comparison to industrial manufacturing. In previous years, banks in general tended to decompose their value chain more than in the past due to cost pressure, for instance, induced by regulatory burden. Still, there is a mixed picture of shoring in the banking industry. On the one hand, various financial institutions are considering shoring functions that are increasingly close to the “core” of their business (e.g. risk and compliance functions). On the other hand, several major banks have recently discontinued service relationships with their service providers and are currently insourcing their previously outsourced capacities. Thus, sourcing has become a “two-way-street”.

Shoring projects usually present a high degree of complexity and pitfalls, as multiple functional areas such as legal, IT, compliance and data protection, among others, need to be taken into account. Thus, the right project setup and approach with a clear view on key success factors help to address these main show stoppers.

In the current circumstances, several factors increase cost pressure on banks and drive down their overall profitability. To name only a few: competition between financial institutions has become more severe; new regulatory requirements have been recently enforced and are increasing; interest rates remain at a very low level and shrink the margins in retail banking; negative demographic development in Western economies will inevitably lead to a decreasing number of customers of banks; several online non-banking financial providers like PayPal have established themselves on the market and provide financial services on competitive terms. All these factors have a significant negative impact on the earnings in the banking sector and force many banks to reconsider their “make or buy” decisions in order to minimize costs. Under these circumstances, shoring of functions either to a third party provider or to a captive service provider or to an “internal” shared service center has become an attractive option in order to alleviate the existing cost pressure.

In Europe, nearshoring relationships evolve between clients in larger European economies and various providers in smaller European economies (internal service providers as well as third party providers). On the one hand, banks in Western Europe (Austria, France, Germany, Holland, Italy, Spain, Sweden, Switzerland, UK, etc.) look for various service providers in the neighboring countries to outsource certain standardized business functions. These functions may typically include nearshoring of IT services, back office services (such as payments, treasury and securities processing, document management, etc.). On the other hand, major service centers are located in Central Eastern and South Eastern Europe (Balkan and Baltic, Bulgaria, Czech Republic, Hungary, Poland, Portugal, Romania and Slovakia). There are also some service providers in larger CIS (Commonwealth of Independent States) markets, such as Belarus, Russia and Ukraine. These destinations are attractive because they have lower labor cost, have skilled labor forces and in some cases a less rigid regulatory environment, but what is more important—they allow for more day-to-day physical oversight compared to offshoring e.g. to India. They also have strong cultural ties to the major economic centers in Western Europe[1] which facilitates nearshoring to such locations.

For these reasons, nearshoring some of the non-core business functions of the bank enables financial institutions to concentrate more on their value-generating business operations and to cut costs by 20 – 30%[2] without compromising high-quality service requirements while maintaining low operational risk.

Market trends reveal a high demand for outsourcing and nearshoring—at the same time, many banks have insourced previously outsourced functions

The banking sector can be characterized by a comparatively low share of external sourcing in the total value chain. According to zeb data, the share of outsourced functions in the value chain in banks is still very low (about 30%) compared to other industries in Europe, where the average share of outsourced services moves towards 70% (or even up to 80% in the automotive sector). However, nowadays banks tend to outsource more than in the past. Whereas in the 1990s, 80% of the value chain was in-house and only 20% was offshore, in the coming decade the share of external sourcing is expected to increase up to 50%[3]. Thus, we can clearly observe the tendency to outsource those business processes which can easily be standardized. Meanwhile, outsourcing has become more complex. First, banks outsourced quite simple functions like facility management, payments operations and human resources management. Now, the outsourced services have a higher complexity and include, among others, securities clearing as well as some credit and treasury operations (see figure 1).

Recent market tendencies show quite a contradictive picture. On the one hand, banks have intensified outsourcing of their business functions since 2000. Nearshoring has become an attractive option for banks in order to stay competitive. Many European banks have already nearshored some of their non-core highly standardized functions or are planning to do so. To name only a few, UBS is currently outsourcing parts of its finance functions[4]. UniCredit has “internally” outsourced its treasury operations and Hypo Alpe Adria has relocated its core banking system to a well-known service provider in South-Eastern Europe[5]. 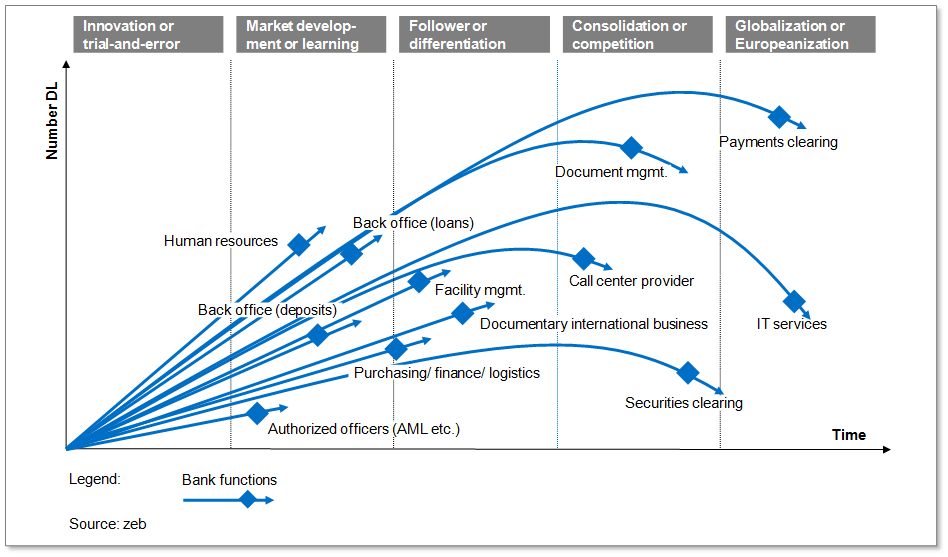 Nearshoring pitfalls and ways to avoid them

As shown above, sourcing has become a “two-way-street” after some major players have insourced previously outsourced functions. Insourcing of the processes indicates that outsourcing projects have a lot of pitfalls. Several outsourcing projects have been unsuccessful and banks are now forced to either change the service provider or to take their previously outsourced functions or processes back. There are typically three possible explanations for this: a) the service quality expectations and requirements have not been met; b) cost saving benefits have not been realized; or c) regulatory requirements have changed and now require higher control over certain functions a bank was able to outsource in the past. Higher control over such functions could only be granted in-house.

zeb’s project experience in shoring projects suggests that the reasons for failed outsourcing / nearshoring projects can be structured into following groups: business case, approach, project and implementation planning and soft factors. The importance of an accurate and correctly calculated business case in every nearshoring project can be hardly overestimated. Typically, HR, compliance, and IT restrictions and constraints are heavily underestimated. As a result, project goals and expected cost benefits cannot be achieved putting outsourcing relationships under heavy scrutiny. Another reason for project failure is the absence of a pragmatic step-by-step approach during the sourcing project.Given the immense degree of complexity of outsourcing projects, inconsistent, incomplete or unclear project approaches are fatal. Lack of time for planning, hasty project implementation, insufficient budget planning or lack of time for personnel training may result in low quality of outsourced services and non-achievement of previously set goals. Last but not least, not considering cultural or other similar conditions (e.g. work styles, linguistic restrictions) has also a negative impact on the project success.

Therefore, there are some critical key success factors in order to deliver high quality nearshoring project in terms of time, quality and budget.

Vast project experience both on the side of the principal as well as the service provider allowed zeb to develop its own nearshoring assessment framework. This framework addresses two general aspects: content and location criteria. Content criteria include functional feasibility, legal, tax, compliance and risk feasibility, IT and HR feasibility as well as the calculation of a business case. The second criterion is the decision for the right location for the nearshored services. Each location, during the decision phase of the project, is rated according to the following aspects: financial attractiveness, HR potential of the particular region (availability and flexibility of staff), its (existing) infrastructure, political stability as well as geographic and cultural proximity to the home country of the bank (see figure 2).

Many banks have faced numerous difficulties during the realization of sourcing projects. These pitfalls have resulted in a high number of unsuccessful outsourcing projects. Project goals haven’t been achieved. To name just a few: expected cost savings haven’t been realized, high-quality service requirements haven’t been met, required flexibility hasn’t been provided. These challenges forced banks to either change the service provider or to re-insource some of their previously outsourced business functions and to rebuild their capacities.

However, it is possible to prevent these negative outcomes if required measures to avoid the obstacles are met in time. A multi-disciplinary view on pitfalls is key. The consideration of all possible risks and restrictions (legal, tax, HR, etc.) is essential for creating an accurate and correctly calculated business case. The project implementation is crucial and requires management commitment, the right project planning and comprehensive end-to-end project approach to deliver expected nearshoring project results in terms of time, cost and quality. If banks want to nearshore some of their business processes to stay competitive, they have to first define clear goals, prepare their organization, commit to the change and choose a reliable business partner. 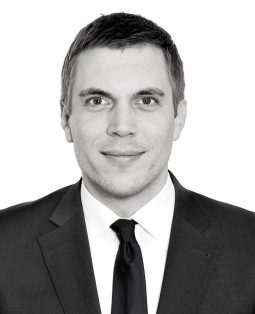 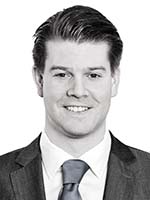 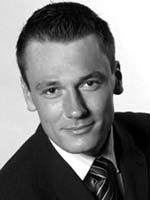